A one-person, unguided bus tour of Anhui and Jiangsu Provinces was my photographic goal for 2012. I traveled with a small backpack (stuffed with medium format camera and bags of B&W film) and a small carry-on suitcase for clothes. This gave me the mobility to travel by local and long-distance buses from Shanghai inland to the mountains of Anhui Province and the large cities of Jiangsu Province. This gallery will grow to display prints from the trip as I work through the 29 rolls to find best images.

The tour started in Anhui Province on Huang Shan (Yellow Mountain). The images there show dramatic cliffside views on fabulously built trails. This is definitely a world-class park, but rewarding in proportion to your hiking stamina. Afterwards I moved on to the Buddhist mountain of Jiu Hua Shan (Nine Treasures Mountain). The fog and rain were pretty overpowering, so my pictures are more atmospheric than I wanted. I would have stayed longer and out-waited the rain, but frankly, the locals were grumpy with the weather and spoke a totally incomprehensible dialect. Coming down from the mountains I bused onward to the cities of Nanjing and Suzhou in Jiangsu Province. The parks and historic sights in both cities offered lots of photographic opportunities and many happy exchanges with Chinese residents and tourists. I especially recommend Nanjing to people who might be interested in travel outside of the usual tour cities. Suzhou is a smaller city, friendly, and perhaps easier for the wandering tourist to find hotels and good meals.

As with previous trips displayed on this web-site, photographs of people were unpredictable bonuses for working the scenic and historic sights. Some of the people have sent me images that they took of me and I have emailed in return with my results. Overall, I would say that Chinese tourists are a friendly bunch who are eager to interact with visitors. Restaurant owners were notably less enthusiastic about me as an individual customer. First, because they figured I couldn't read a menu and second because I might keep a larger group from sitting at a table. If they were willing to serve me, they eventually warmed up when I cheerfully ate whatever they talked me into ordering.

One immediate impression from the trip was that being an older gent and using obsolete camera equipment was a defintite plus. As for older, I paid half price for park entrances and obviously represented no threat to public security. The Hasselblad film camera confirmed me as a harmless, eccentric foreigner and was a continual draw for the flowing crowds. When whole tour groups each looked through my viewfinder, I sometimes I wondered if I would ever get around to taking my shot.
Read More 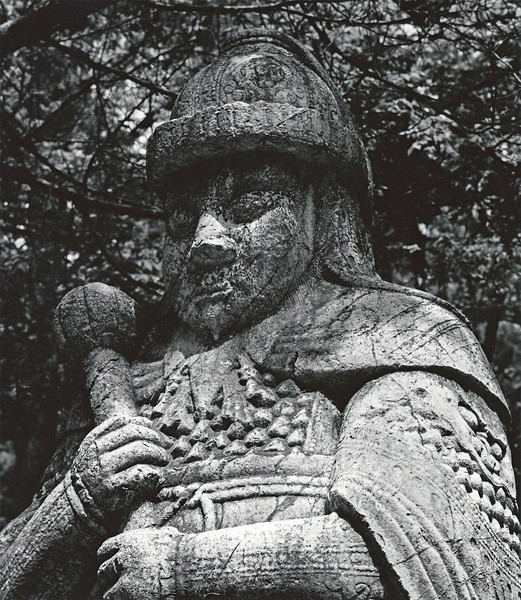 Nanjing, Ming Tomb. The approach to the Ming Dynasty tomb is guarded by a row of 10' tall stone figures.